I do not even remember which poker room started this, but most poker rooms now have this type of game on offer. I am talking about Pokerstars’ Spin-and Go tournaments, or Bet365’s Twister. Those tournaments all have one thing in common: randomly defined prize money, a short stack, extremely fast blinds structure, and a winner-take-all prize payout. Those games have become extremely popular and are great moneymakers for poker websites. 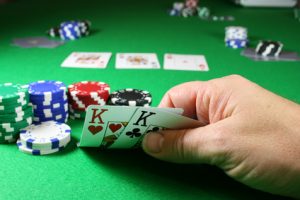 But not all those games can be recommended with a good conscience – at least not to a player who actually wants to make money playing poker. The most important part is how the actual prize money is determined. Let’s assume you pick a $10 tournament, and you start 3-handed. Normally, there would be a total of $30 to be distributed (in this case, only the winner gets paid), but the actual payout is set by a random numbers generator (RNG). So the minimum winning would be 20$ instead of $30 – the remaining $10 would be used by the poker room to cover all those games where the actual winning is set to $60, $120, or even $100,000. The rooms all publish the probability for each prize money amount to show up before the start of the game.

This is where it gets tricky, and where you as a player have no way of knowing whether the game is fair. I am taking Pokerstars as an example here. What if the poker room tells you that it is possible that because of the RNG, you have a chance to play for $10,000 with a $10 buy-in, but actually that never happens?

Personally, I have played several hundreds of those Spin and Gos at Pokerstars, and I have never ever seen the RNG stop at a higher prize money amount than 4 times the buy-in. Maybe my sample is not large enough, but I doubt that those huge payouts ever happen. And if that is true, then Pokerstars is taking a percentage out of the buy-ins that is way too high – high enough so that no player would be able to ever beat those games in the long run. So, Pokerstars (who, for a number of reasons I do not consider as trustworthy anyway) is not a good option.

Too much of a gamble

The super-turbo pace of those tournaments means that there is more luck involved compared to a regular tournament. But that is ok, actually, it is one of the things that does make this kind of game attractive for many. But what if you add another rule, which says you will only play normal poker for the first two minutes, and after that, all players are all-in for every hand until a winner is left with all the chips? How is that still poker? Right. But still, some players may like them.

888 has one of the best choices of low and middle buy-in tournaments, and they have been considered trustworthy for many years, so I do recommend them very much (click here to visit 888).

So, which room has the best super-turbo Sit and Go’s

In my opinion, the best games are being offered by 888 Poker. They go by the name of “Blast” here, and the buy-ins start with €0,50 and go as high as €100. With a €100 buy-in, the highest possible payout is €100,000 (as opposed to $1 Million at Pokerstars, but I doubt anyone has ever won that much from a Spin and Go at Stars). I have played a few hundred of those as well, and I have actually had one €10 tourney where I ended up playing for the €10,000 maximum. Unfortunately, I did not win this one, but at least I know that the RNG does not cheat here.

So, if you like those games, 888 is the right room for it. Follow this link and try their Blast tournaments today!