Online poker is quickly getting back to its glory seen a few years ago as more players join the large poker rooms to get a piece of the action. The promotions and bonuses certainly make everything more attractive and users have some nice offers to consider in 2013. This is just a small sample of how playing on the internet can be more profitable for regular players. On the other side of the stakes list, there has been a lot of action taking place on Full Tilt Poker which has taken back its spot as the best place to play high-stakes games on the internet. After seeing Viktor Blom bank millions of dollars in a couple of weeks to take the top spot for this year, Phil Ivey made an appearance at the popular poker room and dominated the tables. 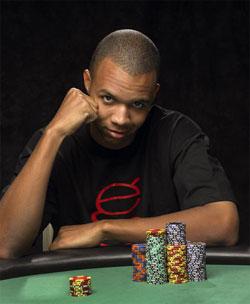 Phil Ivey is currently working on his own poker site where users will be able to learn how to play the game “the right way” from a long list of professionals that have made a name for themselves in both live tournaments and online games. While it looks like the site is not yet ready to be launched, Ivey decided to take a break and join the Full Tilt Poker tables for a few sessions. After being eliminated from the 2013 Aussie Millions Main Event in 30th place on Thursday, he made $589,000 while playing pot-limit Omaha, no-limit Hold’em, and mixed games. This puts his total profits for three days up to $818,000 on Full Tilt Poker, making it the first time he is in the green since November when PokerStars re-launched its former competitor. The biggest pot for Ivey on Thursday was in a no-limit Hold’em game for $300/$600 stakes against Alex “IReadYrSoul” Millar. Ivey was holding pocket Tens and shoved preflop while Millar Called with A-K. After the board went dry for both players, Ivey took the $135,598 pot. Two other large pots were made which also went to Ivey and he was up $280,000 when the one-hour sessions ended.

Joe Cada, who is a resident of Michigan, has recently announced that he will set up a new residence in Canada so that he can play online poker and rejoin the PokerStars tables he is very familiar with. The former world champion has been away from the virtual poker action since Black Friday in 2011 and now plans on making the 45-minute drive to the border every weekend in order to play online. He will join the large selection of players from Team PokerStars Pro that moved out of the United States in order to play on the internet such as Chad Brown, Chris Moneymaker, and Randy Lew. In 2009, Cada won the WSOP Main Event and became the youngest champion in history, and had a lot of success as a cash-game player as well. After the US Department Of Justice banned PokerStars in 2011, he stopped playing online poker. He declared on Facebook that he doesn’t know why he waited this long before getting back to PokerStars and that he is now looking to take part in more live tournaments as well.